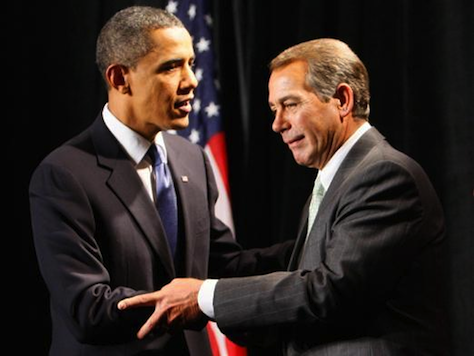 In a big win for House Republicans and President Barack Obama, the House passed a $1 trillion-plus funding bill Thursday night that will keep the government open into next year.

The final vote, which came after a high drama day of behind the scenes arm twisting and vote counting, was 219 to 206.

The Senate passed a two-day funding bill following the House vote, avoiding a government shutdown starting at midnight Thursday. Senate Majority Leader Harry Reid (D-Nev.), however, warned that the “cromnibus,” as the massive spending package has come to be called on Capitol Hill, may not pass the Senate until Monday.

After a lobbying blitz by Obama, Vice President Joe Biden, and other White House officials, dozens of House Democrats broke with Minority Leader Nancy Pelosi (D-Calif.) and backed the legislation, despite controversial provisions on Wall Street and campaign finance.

Thursday’s results were a major blow to Pelosi, who had led Democrats in hours long closed-door meeting where they bashed the bill and counted on its defeat to help her recover politically f0llowing the Democratic debacle on Election Day. But 57 Democrats crossed the aisle to vote with 162 Republicans to help pass the measure, undermining Pelosi’s hardline stance.

In a major split with Pelosi - the second such public division in recent weeks - Minority Whip Steny Hoyer (D-Md.) backed the legislation. Hoyer quietly lobbied other Democratic moderates and Appropriations Committee members to line up behind the bill, and in the end, he proved to Republicans, Senate Democrats, and the White House that he could deliver the votes, at least in this case.

Rep. George Miller (D-Calif.), another Pelosi ally, voted for the spending package after a provision on multi-employer pensions that he strongly backed was included in the legislation.

The vote was also a big win for Boehner, Majority Leader Kevin McCarthy (R-Calif.) and Majority Whip Steve Scalise (R-La.). Scalise’s whip operation was under heavy pressure on this vote, and he was able to keep members in line despite a long delay in the final vote. Sixty seven Republicans ended up opposing the bill.

“The House did its work and tonight we set the stage for a battle with the president on this illegal actions on immigration when we have a Republican Senate in just a few weeks,” Scalise said after the House passed the long-term funding legislation.

The dramatic finale came after a day of scrambling by House Republicans and Obama, who was trying to convince undecided Democrats to vote for the nine-month spending bill with just a few hours to spare before a government shutdown.

With the spending bill in limbo Thursday evening, Obama and Biden were personally calling House Democrats urging them to support the bill — even as many liberals resisted, complaining about policy riders, especially one that rolled back a major Wall Street regulation that is part of the Dodd-Frank law.

White House chief of staff Denis McDonough traveled to Capitol Hill in an attempt to convince Democrats to support Obama and the omnibus. House Republican leaders - and Senate Democrats - were cautiously confident that the president could turn the votes for the nine-month funding bill, which Obama was able to do.

McDonough made an aggressive pitch to pass the omnibus to put more certainty into the economy, arguing that the federal government cannot afford to continually operate on short-term continuing resolutions, according to Democrats leaving the meeting.

But one Democrat said there was ample frustration from members over why such provisions over campaign finance and financial services were added in “the dead of night.”

“We want answers,” the Democrat said.

McDonough said the president was also concerned with those provisions.

The calls from the White House came as the House went into recess Thursday afternoon, with Republicans and Democrats trying to cobble together 217 votes to put government spending on autopilot until September 2015. House Republicans believed they had picked up some votes as the day has worn on, giving them a cushion for a potential vote. And in the Democratic caucus meeting, McDonough made the argument that Democrats will have less leverage if they back a shorter term deal that expires when Republicans control the Senate.

The chamber recessed shortly after 2 p.m. Thursday to figure out whether members could garner support for the larger deal or would need to pass a pared-back measure to avoid the second shutdown of the 113th Congress.

Pelosi firmly against the bill due to the loosening of Wall Street regulations that was tucked inside the legislation. It has angered many on the left and even Obama, who supports the package but opposes that element.

Obama late Thursday announced his support for the bill at a critical time for the 1,600-page package, which just narrowly cleared a procedural hurdle in the House on Thursday.

“The Administration appreciates the bipartisan effort to include full-year appropriations legislation for most Government functions that allows for planning and provides certainty, while making progress toward appropriately investing in economic growth and opportunity, and adequately funding national security requirements,” a White House statement read.

Despite the White House’s stance, Pelosi remained firmly against the bill throughout the day, saying, “It is clear from this recess on the floor that the Republicans don’t have enough votes to pass the cromnibus,” Pelosi declared in a letter to Democrats, convinced she was winning the fight. This increases our leverage to get two offensive provisions of the bill removed: the bank bailout and big money for campaigns provision.”

“However you decide to vote in the end, I thank those who continue to give us leverage to improve the bill,” Pelosi added.