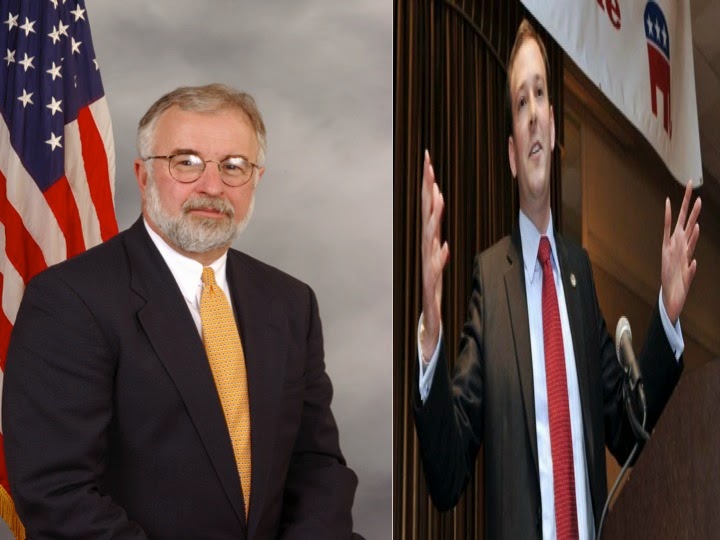 Democratic Rep. Tim Bishop and his Republican challenger state Sen. Lee Zeldin traded bare-knuckled jabs on everything from student loans and Common Core to the minimum wage and immigration Friday night in a live radio debate at St. Joseph's College.

The crowd of 187 in the auditorium at the college's Patchogue campus frequently broke into applause when their favorite for the 1st Congressional District seat landed verbal blows during the hourlong debate, aired on Long Island News Radio. At one point, Bishop said: "I guess the gloves have come off."

"We can't change Washington unless we change the people in Congress we sent to represent us," Zeldin said in his opening statement. "It's time to term-limit Tim."

Bishop, a 12-year incumbent, said he was proud of his record, including legislation to lower college costs and provisions in coastal laws that would increase funding for dredging of local waterways.

Bishop (D-Southampton), who supports Obamacare "as a work in progress," assailed his Republican foe for failing to offer specifics on how he would replace the program or handle the 12 million immigrants in this country illegally. Bishop favors a 15-year path to citizenship in which people here illegally would pay fines and back taxes.

During questioning, Zeldin balked at a bill that would allow students to refinance debt at 3.4 percent because "government control of interests is not the best answer."

Bishop said he would support the measure because it would produce a better educated workforce. "If I have a choice between taking away a $65 billion subsidy from banks or giving it back to needy students, the choice is clear," he said.

The two men also clashed on the minimum wage. Zeldin said raising the wage to $10.10 an hour would hurt small businesses and force many to shut down. Bishop supported the increase, saying it will generate spending that will help small businesses and significantly cut food stamp costs.

Zeldin also said he opposed Common Core as "dropping kids in the deep end of the pool without a life preserver."

Bishop said the state's rollout of the program was worse than the Obamacare rollout, but added that the state should not abandon the effort to raise standards and should fix the problems because 20 percent of college students now need remedial courses.
Publicado por Luis Montes Brito en 14:00