The pace of political change is profound in Long Island. Salvadoran community and others etnic groups are awakening 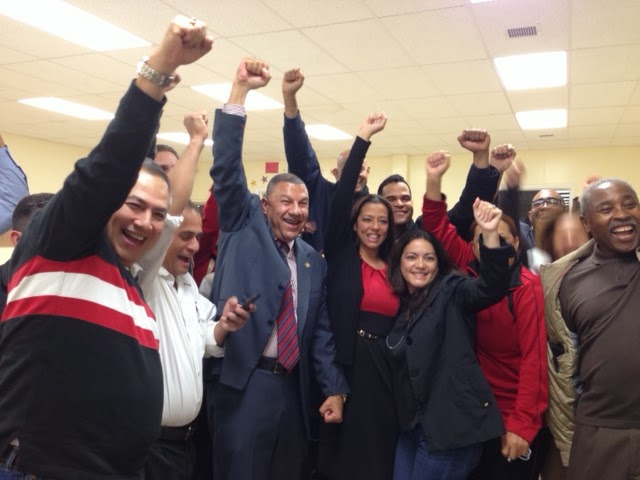 Candidates from recent immigrant and ethnic communities are starting to assert themselves as a political force across Long Island.

More than a dozen residents with backgrounds in El Salvador, Haiti and South Asia ran for office in this month's local elections.

In some contests, they ran against each other. Many were underdogs. But three first-time candidates were elected and two incumbents easily retained their seats.

Community advocates said it was only a matter of time, in the natural battlefield of politics, for new voices to emerge from the region's immigrant and ethnic communities. And as the immigrant population grows, Democrat and Republican leaders are vying for those voters to keep or regain political power in Nassau and Suffolk counties, in towns and on local boards.
"This trend is inevitable and is invaluable, too, if you want a community that is cohesive and is working together to build consensus on important problems," said Lawrence Levy, executive dean of the National Center for Suburban Studies at Hofstra University. "These are not my mother's and father's suburbs anymore. The pace of change is profound."

In one of the more contentious races, Salvadoran Monica Martinez, an assistant principal at Brentwood East Middle School, grabbed the Democratic nomination in the primary for Suffolk's 9th Legislative District from longtime incumbent Rick Montano. She then unseated him with 71 percent of the vote in the general election.

Martinez, 36, won in the immigrant hub spanning Brentwood, Central Islip and North Bay Shore by campaigning to end what she characterized as the district's neglect. She knocked on doors to share the story of her American journey as one of four siblings brought from El Salvador by their mother. She told it in English and Spanish.

With support from County Executive Steve Bellone, she became the fourth Salvadoran-American elected on Long Island, where people from that Central American nation make up the largest immigrant group.

Martinez, of Brentwood, said she was proud to campaign as "a product of the success of immigration" and saw her roots as a positive factor in courting voters.

"We are just another immigrant group following in the paths of others who came before us, including the Irish, the Italians," said her brother Tony Martinez, 44. He became the first Salvadoran elected in the state when he won the Babylon council seat in 2009 and ran unopposed this year.
"Part of it is that people have to integrate into the social fabric of America, and what that means is us getting involved in the democratic process," he said.

'A party of all the people'

Salvadorans started moving to Long Island as civil war consumed their country three decades ago. They and other groups have been slow to enter the political arena because of the many challenges immigrants face, said community leaders, party officials and experts.

In the Nov. 5 election, five Hispanic candidates, four South Asian candidates and five of Haitian heritage were among those on the ballots for various seats in both Long Island counties. Three ran as Republicans and the other 11 were on the Democratic Party line.

Republican Nasrin Ahmad was born in Uganda to parents who had left what is now Pakistan. She became the first South Asian elected to public office by winning the Hempstead town clerk race, defeating Democrat Jasmine Garcia-Vieux, 36, whose roots are Puerto Rican.

Valerie Cartright, a Democrat who is the child of Haitian immigrants, won a seat on the Brookhaven Town Board.

Carrié Solages, 34, a Haitian-American Democrat representing Elmont in the Nassau County Legislature, easily kept his seat despite a challenge from Naomie Jean-Philippe, also a Haitian-American candidate nominated by Republicans.

Montano, 63, who lost the Suffolk County Legislature seat to Martinez, was one of the first Puerto Ricans and Latinos elected to local office in the region.

The growing number of candidates from ethnic communities who didn't win their races this time represents a kind of "warming bench" for future leadership, said Jay Jacobs, chairman of the Nassau County Democratic Committee.

His party is "trying to ensure . . . that our elected officials look like the people," Jacobs said.

Republicans said they, too, are moving toward "a lot of committeemen and women" from diverse groups, said Joseph Mondello, chairman of the Nassau County Republican Committee.
"You are not going to win anymore unless you are a party of all the people," Mondello said. "I am very proud we ran Nasrin [Ahmad] and Naomie [Jean-Philippe], and you can expect more in the future."

The candidates from immigrant backgrounds said that they're proud of their roots but seek to make Long Island better for all its residents.

"I wanted to give to this wonderful, wonderful country that has given so much to us. I am living the American dream," said Ahmad, 56, a Salisbury resident. She is a naturalized U.S. citizen who came to New York in 1984 and speaks Swahili, Urdu, Hindi and Punjabi as well as English.

"Where can an immigrant come to a country, bring up my children, live a great life and be elected to public office?" Ahmad said the day after her win with 52 percent of the vote.

Cartright, 38, a civil rights attorney from Port Jefferson Station who won her town seat with 52 percent of the vote in a Brookhaven community with few Haitian-Americans, said "it's important that the leaders on Long Island reflect the population." But she was elected on a campaign for broad quality-of-life issues that included better outreach to residents and affordable housing.

The combination of local issues and the desire for representation was also a factor in Martinez's campaign.

"Many people I came across share the same history and the same story that my family and I shared," she said. "It was also the fact that people were tired of the complacency in the district."

"It's like a moment of awakening for the community," said María Magdalena Hernández, 49, a North Bay Shore resident and Salvadoran immigrant who voted as a new U.S. citizen for the first time in the Nov. 5 election. "I see that people are feeling very motivated."

The Salvadoran population on Long Island numbers from 95,000 to 104,000, according to the most recent U.S. Census Bureau estimates based on surveys from 2009 to 2011. About half of those reporting Salvadoran heritage are U.S. citizens -- 36 percent were born in the United States and about 15 percent are naturalized citizens.

Their political participation has been delayed by typical immigrant factors that include focus on their homeland's issues and decades of working their way through a maze of immigration statuses, said Patrick Young, program director of the Central American Refugee Center, a nonprofit advocacy group in Brentwood and Hempstead.

"We are at the early stage of their involvement here and, eventually, whoever is putting together political tickets in this part of the county [Brentwood] will have to consider how to get Salvadoran immigrants involved," Young said.

Bruno A. Cubas, a Uniondale school board member and a Salvadoran, said much more effort is required for the community to overcome apathy, to learn the system and mount more successful candidacies.

He said he won his seat mostly with the backing of black voters because many of the Salvadorans in his school district weren't involved.

"I still don't see many Latinos at the PTA or school board meetings," said Cubas, 48. "I have been trying to get them to participate more through a soccer league. . . . It's about time for us to come out and become part of the process."

Escobar, who heads the Salvadoran-American Chamber of Commerce of Long Island based in North Bay Shore, said many had been following Martinez's campaign.

"We are very happy that she is going to represent us," he said. "She speaks our language and she has the same desire of betterment of our immigrant community."

Carlos Antonio López, one of Escobar's regular customers, said he voted for Martinez because she knocked on his door and told her story. "She's someone for our children to look up to," said López, 51, of North Bay Shore. "It's good to see that we have representation because we live here."

Sergio Argueta, a Salvadoran-American community advocate in Uniondale who made an unsuccessful 2008 primary run for an Assembly seat, said while "it's great" to see immigrants in contention, they need to become more adept at playing the political game.

He is focused on establishing the Nassau County-based initiative "The Corridor Counts" to support qualified minority candidates. "We still have a long way to go in terms of organizing politically as Latinos," Argueta said, "let alone [by] our individual countries of origin."
Publicado por Luis Montes Brito en 8:24